Looking for guidance about maternal mental wellbeing and COVID-19?

More than 1 in 10 women develop a mental illness during pregnancy or within the first year after having a baby.

7 in 10 women will hide or underplay the severity of their perinatal mental illness.

Suicide is a leading cause of death for women during pregnancy and one year after birth.

Perinatal mental health refers to a woman’s mental health during pregnancy and the first year after birth. This includes mental illness existing before pregnancy, as well as illnesses that develop for the first time, or are greatly exacerbated in the perinatal period. 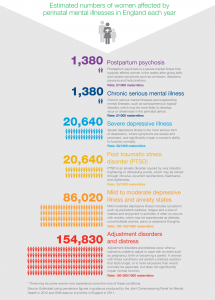 In the UK, we take it for granted that all women will receive the support they need to look after their own physical health and that of their babies during pregnancy and the first year after birth.

Despite the importance of mental health for a mother and her baby, we know that a woman’s mental health will be treated very differently.

This inequality is leading to extremely serious problems that have a huge impact on women, their babies and their families. Find out more in our Counting the costs section.

But now is the time for this inequality to be tackled.

We call for the mental health of all women to be monitored, discussed and treated in the same way as her physical health during this crucial time. We also call for the same standard of perinatal mental health services to be available throughout the UK. Currently, women in large areas of the UK are not receiving the support they need, as our map shows.