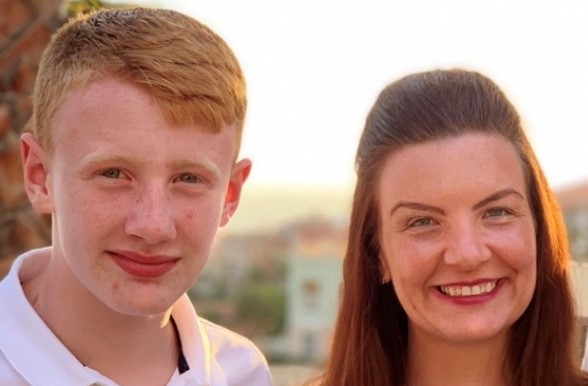 I have no doubt that my recovery would have been quicker and my husband’s experience less traumatic if I’d been under specialist perinatal mental health care.

Whilst living in County Antrim in Northern Ireland, I gave birth to a healthy baby boy in February 2007. Because breastfeeding took a while to establish, we didn’t go home until four days after my son’s arrival. But everything seemed normal, perfect even, when we did return home.

That was until I started to think my dead grandparents were talking to me, telling me my baby was sent from God. I obviously knew something wasn’t right and frantically read through books to understand what was going on. I self-diagnosed postpartum psychosis to my midwife the next morning, who advised me that my husband and I needed time to adjust to parenthood.

On day seven after the birth, things had escalated to such a point that on the evening I growled at my husband, “If you don’t listen to me, I’m going to shake your baby!” Words that still haunt him today. After this incident, an ambulance was called and I was taken to a general psychiatric ward, because there was no Mother and Baby Unit (MBU) in Northern Ireland.

My husband had no idea what was happening to me, and was hysterical, but he had to return home for our son. Thankfully, my mum flew over from Scotland the next morning. She was his stand-in mum for 12 weeks, as this is how long I stayed in hospital for. These 12 weeks were a rollercoaster ride for everyone and the impact of being separated from my baby can’t really be put into words.

I started making progress after receiving Electro Convulsive Therapy (ECT) and was discharged home after 12 sessions. Our journey after discharge was long and challenging but we got there.

Missing out on so many of my son’s firsts is difficult to think about. And although I’ve been fully recovered for many years now, my husband still struggles with his mental health because of post-traumatic stress caused by my psychosis and the lack of support he received.

I have no doubt that my recovery would have been quicker, and my partner’s experience less traumatic, if I’d been under specialist perinatal mental health care. That hurts so, so much, as does the thought that our son is now 13 years old and there is still no MBU in Northern Ireland.

Visit MMHA member Have you seen that girl?‘s website to read more about Jillian’s journey.

If the content of this story causes you to think of anything that has happened to you or someone you know and you feel upset, worried or uncomfortable, please see our support page for a list of services who may be able to help.